David Booth is one of the funniest poets I know, and he comes by it seemingly accidentally. A gentle soul who teaches high school humanities, he serves up the odd and incongruous with a perfectly straight face. His wry sense of humor is in ample evidence in his delightful collection Too Bright to See.

“When I was starting out, I used to write these things — stories mostly, in total earnest, and I’d share them with someone and they would laugh uproariously,” says Booth. “I’d say what’s so funny? It was a tonal thing I just wasn’t aware of. I guess I didn’t understand melodrama or irony or satire.”

Over time, he says, he began to fine tune his capacity to align his intent for a given piece with the end product and the way that it is received. Of course, ultimately there is no way to fully control how an audience receives an artist’s work, as Booth would acknowledge. Ceding control, in fact, is a critical part of his process. Initially he focused on writing prose but then began to explore imposing line breaks in his stories or essays and poems began to emerge. He is a constant creator — he is always generating new work and constantly playing with the form a piece might take. The work itself teaches him its form.

The 45 poems in Too Bright to See include several concrete poems — works that use lines as visually plastic elements. For example, “Sunflower” tells a simple and beautiful story of a triangle of love and care among three gay men of different generations. The arrangement of the lines on the page mimic an array of petals around a disk of seeds, which to me suggested the opening of a radiant human heart. Booth says that his early efforts to play with the dynamic field of the page involved imposing forms that didn’t always work with the material. He began to realize that imposing an arbitrary order on a piece was not as successful as being open to the many possibilities. 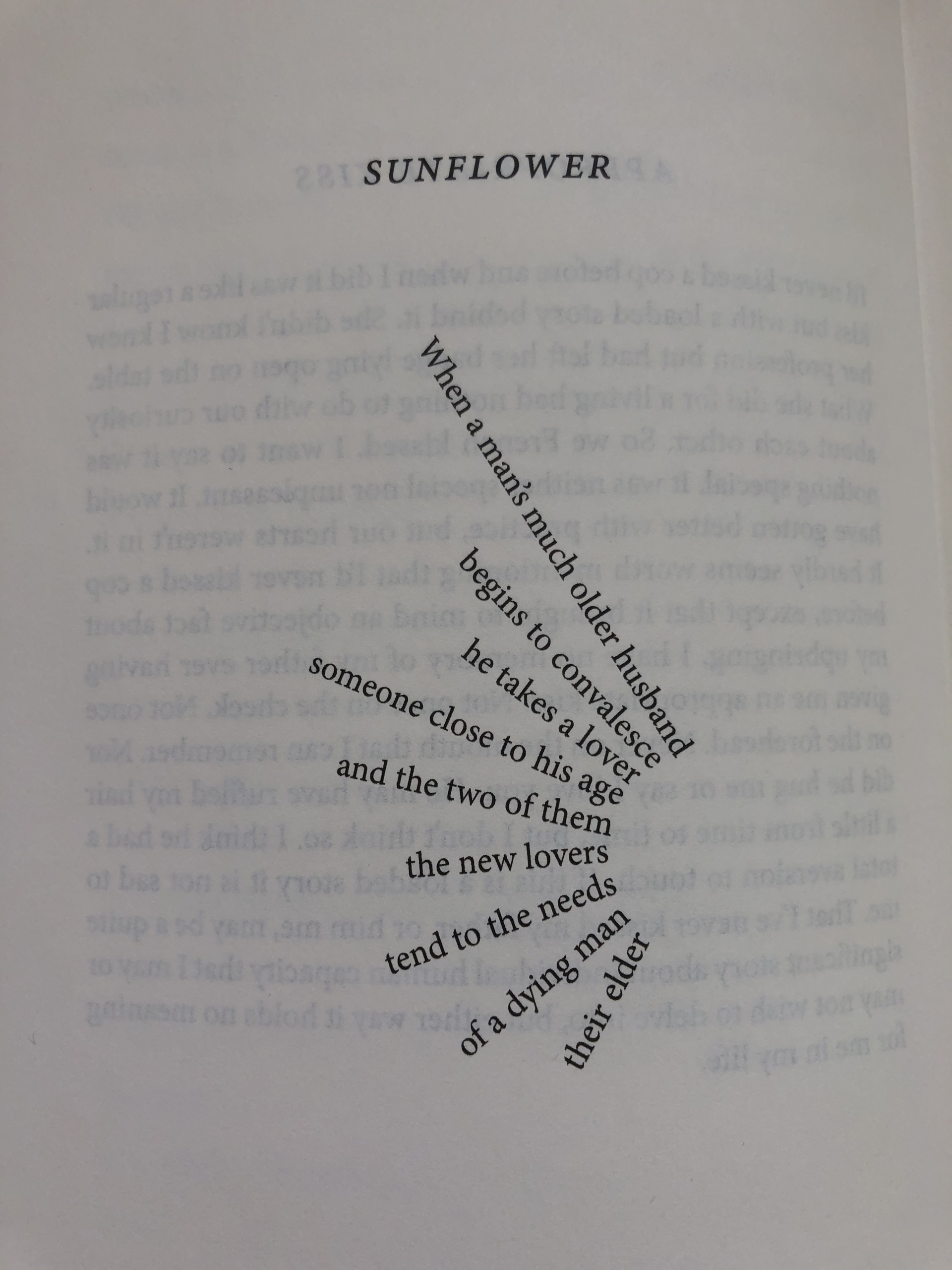 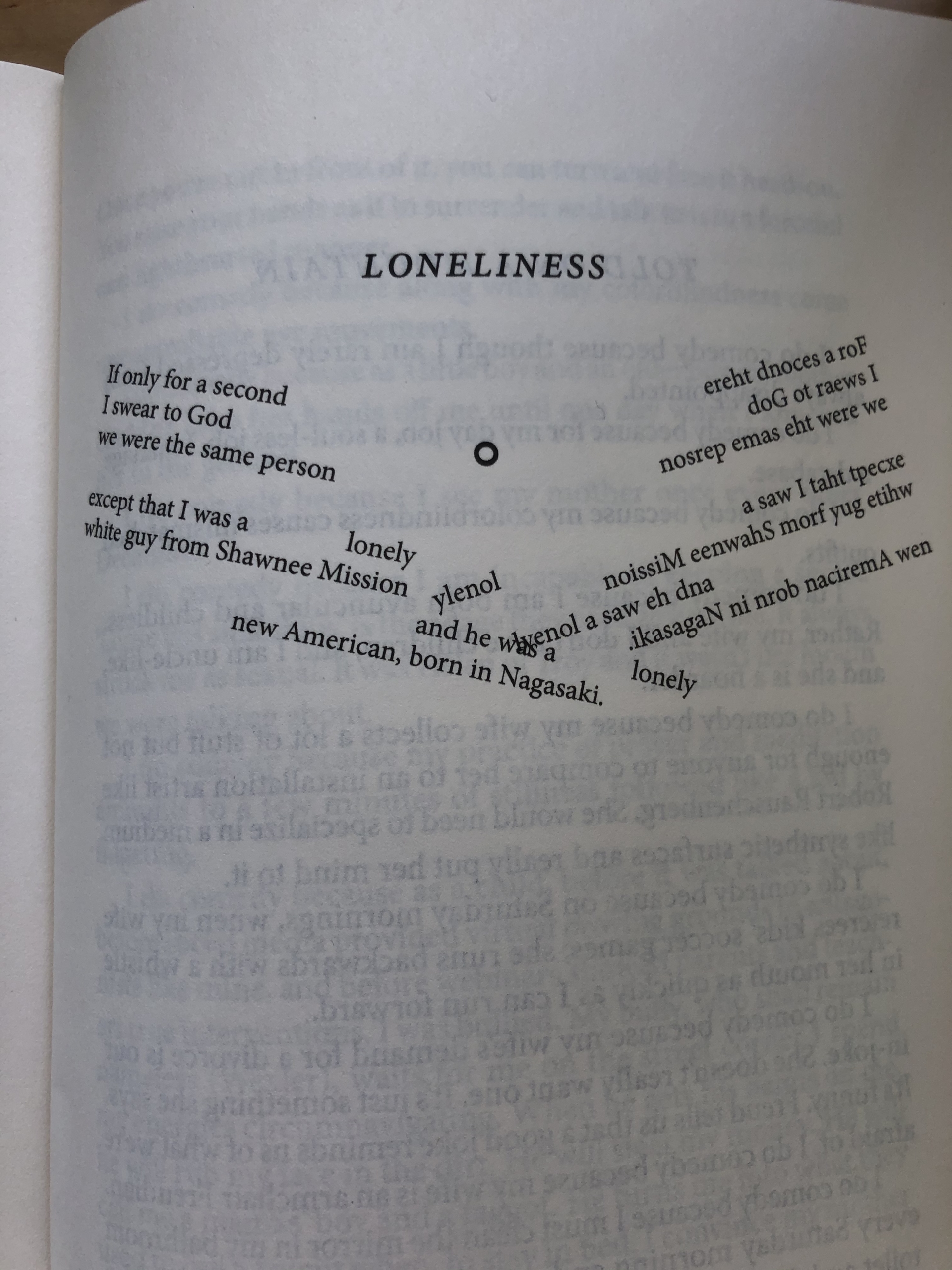 “I became receptive to something graphic,” he says. “So for “Sunflower” I just opened myself up and said, what does this look like?”

Another poem that explores graphic possibilities is called “Loneliness.” It reveals one of the other striking aspects of Booth’s work — his capacity to elide the distance between personal, particular suffering and the large-scale destruction inflicted by human beings upon one another through war and genocide. The two characters of “Loneliness” — the white guy from Shawnee Mission and the new American from Nagasaki — may or may not have a traceable connection to the genocidal acts referred to obliquely by the names of their hometowns. Booth connects them through their shared experience of loneliness, even as he places that small personal experience on the vast historical stage where atomic bombs and manifest destiny erase lives.

Booth rather reluctantly calls himself a prose poet, and many of the pieces in this book have density and narrative drive, but the road is full of unexpected twists. In “Appropriate Kiss,” a narrator moves from a liplock with a cop (“What she did for a living had nothing to do with our curiosity about one another”) to the lack of physical affection from his father, which, he assures the reader, holds no meaning for him. Other poems touch on police brutality, the childhood of JS Bach, and a gorilla named Peter the Great. The book’s title poem ends, very surprisingly, with a hippopotamus.

“Surprise in writing is important to me,” says Booth. “In a sense it comes out of this desire to be a pleasing writer, I want it to be a pleasing it experience…my hope is that when someone encounters that hippo, they won’t forget it.”

I certainly will not forget it —Too Bright to See is an incredibly rich and varied collection. It reflects its author’s penchant for sharing the delights he has gleaned from a life of reading and engaging with others. I told Booth that I felt his presence as a teacher in these pages, and I was very struck by how he replied.

“One of the things about teaching teenagers is they see the truth of things all the time and it’s very inspiring. The irony about my creative writing is that I have a fairly thin skin. The thing about teaching is that you feel overexposed all the time…There’s a way in which teaching keeps the same space as that which is created by a published work — there can be constant scrutiny when you put something out there. So (in my writing) I try not to project or to assume, but to be simply, right now, and then it’s bound to be something good. And then it’s truth without message, and that’s teaching all the way.”