Moving from Your Place with Joe Goode

Award-winning choreographer Joe Goode says that humor comes from personal experience, not objective observations, and that compassion can be found in our experience of our bodies. I believe him, and I love the work he’s created with student veterans at UC Berkeley, Reentry: The Process of Resilience.

Goode moved to San Francisco in the 1980s, when he was seeking a new means of exploring identity through performance. At that time, the moment was ripe for a shift from the dominant idiom in dance, which was abstract and cold, to work that channeled lived experience. Feeling unable to find his niche in the New York theater and dance scenes, Goode had come close to giving up performing, but he was revitalized by a community in San Francisco that inspired him to pursue his vision.

“I wanted to work from my own place, using my voice and body. I thought, I’m going to allow myself to speak and write from a place of actual identity as a queer person with dignity, not in a lamé jockstrap waving a flag. I’m very grateful for having a community that embraced that.”

Originally coming to prominence as a soloist, Goode was driven more by an appetite for exploration than by ambition to build a company. But with the success of his work came new opportunities, and the Joe Goode Performance Group arose. He continues to work with a group of highly skilled performers, but in recent years his interest in offering “voice and body” has blossomed into The Resilience Project, which brings the words of many others to the stage.

“I wanted to create a piece with language that was not mine, actual words, actual people. I asked friends and family, what was the hardest moment in your life, and how did you handle it? How do we face, or choose not to face, a crisis? How do we hide? Everybody wanted to talk about it. Part of this came out of living through the AIDS epidemic, feeling I was in cloud of tragedy for a decade or more, but so much wisdom and strength was found there.”

Goode and his company shaped the language from these discussions, added movement, sets, and music to complement or reveal their meaning by contrast, and created the “Human Kind” series, and then a larger piece, “When We Fall Apart.” After seeing the latter, a friend based at Kansas State University, which is close to a military base, invited Goode to work with veterans.

“I said no at first, I’m not a veteran, I don’t share that experience. But then I met with them. [I understood that] this was part of their healing, feeling, being heard. What moved me especially was that they are so young, 18 or even 17, and many are sent back home injured, and they have a whole lifetime ahead with these real challenges. They felt a little like my children, and it was a real journey and an honor to work with them.”

I saw one incarnation of the Resilience Project last night, “Re-entry: The Process of Resilience” a piece that Goode and company created in collaboration with the Cal Veterans Center at UC Berkeley. It was fluid, moving, and satisfying — the words were vivid, well chosen, and well performed through the voices and bodies of the performers. An artful, simple set of chairs and scaffolding made a fine frame for the movement, as the movement framed the words, and the words framed the particular experience of veterans who become students at Berkeley. I was struck by the way the story of one student-veteran, a woman who had decided to be an English major, revealed the way that experience itself can be discounted.

The first play she had to read in her Shakespeare class was Titus Andronicus and the Princeton-educated professor struck her as having no respect for her experience of actual war. She wonders, does he even know what’s going on in the Middle East? Does he really think she doesn’t know what American exceptionalism means? Know your place…she said (addressing the professor), and the audience erupted in snaps of appreciation.

“Know your place” is a very evocative phrase, and it has certain societal overtones. But perhaps it could suggest that we all take a look at what kind of a world we are creating together. Know your place so that you can notice where and how those around you are living. Know your place so that you can transcend the restrictions that restrain your growth. Learn how to know where you’re at and then forget yourself for a while and concern yourself with others. Open your eyes and ears to the stories of lives unlike your own. Open your heart. Joe Goode and his company are helping us all do just that with the Resilience Project, and Ron Williams and the Cal Veteran’s Center should also be acknowledged here for their important work.

You can see Reentry: The Process of Resilience through Sunday, November 20, at Durham Studio, UC Berkeley, and a different iteration of the Resilience Project at Joe Goode Annex in San Francisco, December 1-3. Do go! 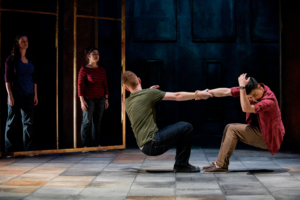