Whenever possible, don a mask and prance, I say. Visual artist and performer Sasha Petrenko gave me and eight others that chance at the Villa Montalvo’s Rock the Garden event on July 22. Following a suggestion from my friend Glori Simmons (a great writer whose book of stories, Suffering Fools, comes out this fall) I responded to Petrenko’s call for “movers” willing to join the New Urban Naturalists, also known as prancers wearing giant papier-maché animal heads.

For this iteration of the NUNs (yes, there is something swell about the acronym) Petrenko, with performer Gillian Campbell’s help, created heads for Owl, Red Squirrel, Baby Elephant, Crow, Puma, Alpaca, Deer, Antelope, Bear, and Coyote. Though Petrenko painted them “unnatural” colors, each head captured something of the given animal’s noble essence, something I might call its–ness. Crow had crowness, Owl owlness, and the silver Alpaca’s Alpacaness was only heightened by the presence of a bindi on the forehead. Of course, it is possible that the heads seemed right to me because I showed up ready to play, and met a group of eight other adults and one child who shared that readiness.

The performers included professors of performance studies like Petrenko — who taught at the University of San Francisco for many years — dancers with backgrounds in ballet and in Butoh, and musicians willing to offer up their bodies as the instrument. If you weren’t willing to play, it would be immediately evident to you that you were in the wrong place. For example, you might not be able to feel which head was the right one for you to don. I will admit to having an inclination toward Owl at first, but when Crow was suggested, and Baby Elephant (Jose Abad) and I agreed

to switch for the last of the three scenes we would perform, I thought, yeah, that’s right! Of course, saying “yes and” is the key to any improv. And improv this was, for the most part. Petrenko did provide an outline for the three scenes, of fifteen minutes each, that we would perform. First, we would descend the Villa’s grand staircase and spread out across the lawn.

“Act casual,” she said. “You can move the way your animal does, or not.” Then, we would waltz-march in a line along the lawn’s outer edge, following a simple rhythmic step. Finally, we would free-form march with picket signs we were marking with words like “Look” “Listen” and “My World,” and then shout words of protest and end by doing a ten-minute silent sit in.

At the end, one performer would rise slowly, take off her/his head, then tap another performer on the shoulder, who would in turn do the same to someone else. There would be a moment of stillness as the performer held the animal head, perhaps readjusting to their native mask, and then she/he would walk off the lawn. We all agreed that the very end of the piece should be performed by the youngest member of our group, the now-six- year-old Khalila, a.k.a. Coyote. Coyote would take off her head and follow the performer who tapped her out, leaving the final NUN, her mother, the Alpaca Sea Heikes Chel, alone on the lawn. Then, as if suddenly remembering that we all belong together, Khalila would run back to fetch her mother.

Chel is a Butoh and Body Weather performer who was arrested in Myanmar in 2012. The authorities, who had recently released opposition leader Aung San Suu Kyi from house arrest, were apparently not ready for play. They were not sure what exactly to charge Chel with, since they had no specific law against rolling down the street wrapped in a plastic floor covering. Perhaps they felt that if they let her and her fellow performers (who were engaging in subversive activities that included standing still under an umbrella and blowing a kazoo in the direction of the palace) get away with it, anything would be possible. In public.

“The anonymity is freeing,” said Petrenko, describing the NUNs previous performance, which was part of a class she was teaching at USF. “My students would sometimes ask why, why are we doing this? Why are we wearing these heads in public? But then they realize that their faces are hidden, and they stop feeling self conscious and are freed up to move.”

Petrenko’s playfulness is a hallmark of her work — another project is a human-sized bird’s next, made from weaving cast-off clothes together — as is a concern with the way we humans have spread ourselves over the planet. It would be easy to assume that the New Urban Naturalists are trying to make people think about extinction, and after the show, several people asked us if that is what the performance meant. Hopefully it was thought-provoking, but Petrenko didn’t ask us to deliver such an explicit message.

Her work is more open-ended, and for me, participating in it was a reminder of what falls away when we drop the faces we wear as adults. Children know things, other things, from the universe before they were. They’re closer to the ground and closer to everything beneath the ground, through the earth, and back out into the cosmos. In their play, children step into limitlessness and inhabit contradictions without difficulty, being themselves and the Coyote, with equal and simultaneous seriousness.

As adults we are not encouraged to play, except perhaps at games that help us slake some competitive urge. We have built quite a world for ourselves — in this country, a normalcy anchored to getting and spending. In America, those who are not struggling to simply get by are working very hard at acquiring more. As a result, we are starved for a breath of air not collared up by the Puritan work ethic and the monetizing of everyfuckingthing.

See the ooh and ahs when a baby or a dog enters the workplace. See the delight that flash mobs bring. See also the extraordinary power of the public expression of a reality not condoned by a restrictive ruling power — such as the coordinated collective moments of stillness by the Danes during the Nazi occupation of their country, or the silent presence of African-Americans who lined the pathways members of congress walked as they went to vote on the 1964 Civil Rights Act. See Sea Heikes Chel (or the Plastic People of the Universe, or the Sex Pistols singing “God save the Queen”) reminding free thinkers of the possibility of being freely.

Now, the Villa Montalvo is not Myanmar, and our protest was not as directly weighty as resistance to Nazi occupation or to the bigotry baked right in to the American apple pie. Except of course, that all of these social constructs, contracts, and realities — by degrees more or less murderous or free — are created by the actions and agreements of people. Maybe some of the people watching us got to thinking a bit about the world we share with the animals, and by extension, about everything that is not us, but to which we are bound based on the fact of having corporeal form and sharing limited resources. Maybe people reflected that, as human beings continue to push into formerly wild territory, we’re in a looking glass moment. Mountain lions are sitting on decks in Northern California, watching Mom make a sandwich and flip through the channels. Meanwhile, the lion’s cousin languidly licks stale meat in a city zoo, barely aware of the child outside the bars yelling “Look! He’s eating!”

I don’t know what people were thinking as they watched us chant our Dadaist-nature-poem protest —“Rocks!” “Air!” “Trees!” “Lichen!” “Moss!” — but they gave us a wide berth. When we sat still they moved back in to take pictures, and in some cases to poke us or try to get us to react. After the performance, we let people, mostly small ones, try on the heads. Some of the children even replicated our waltz-march step. If there was a message, at that point it seemed to be try on a different head. Which, compared to you’re only as good as your stuff or innovate to thicken the bottom line seems radical. 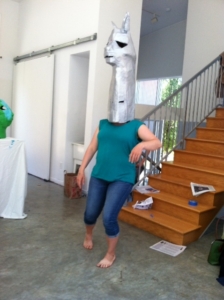 And then a man wearing a tee shirt listing various human hotspots for art and industry — Tokyo, Berlin, Paris — asked what we were protesting. “Humans,” said Sea. “Oh that’s me,” said the man, seemingly ignorant that the performers were too.